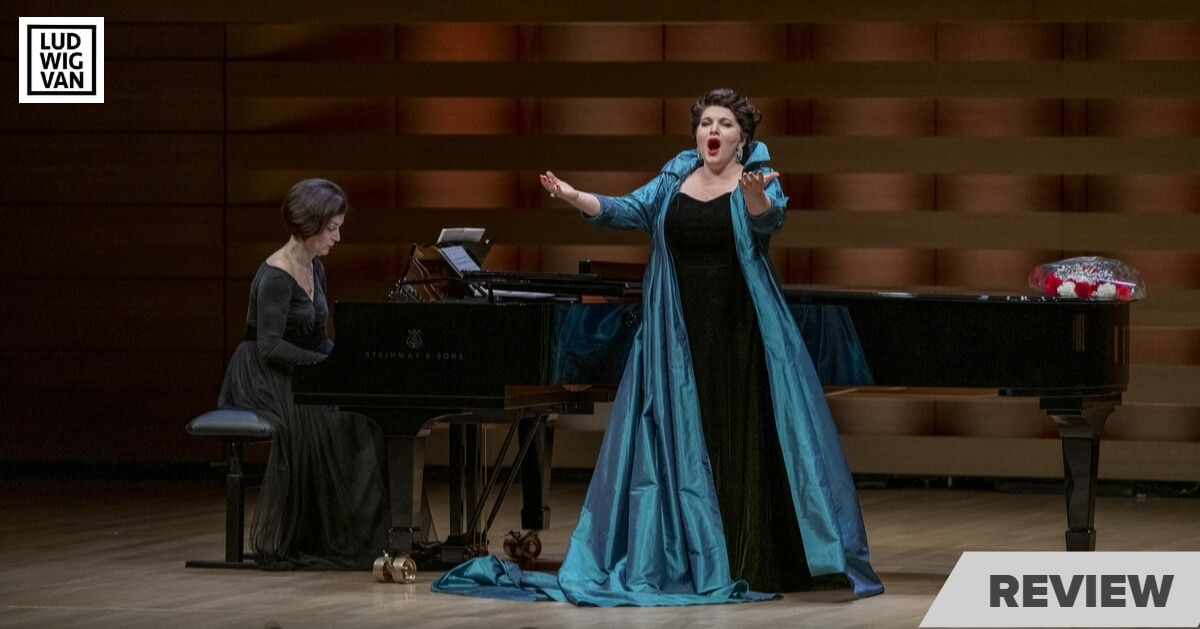 “She came, she sang, she conquered” may sound a bit like the PR hyperbole of an artist agency, but to those of us in attendance Sunday evening at Koerner Hall, it was a pretty apt description.

Abkhasian-Russian soprano Hibla Gerzmava returned to Toronto after having wowed audiences two years ago as a soloist in Russian conductor Vladimir Spivakov’s Moscow Virtuosi concert at Roy Thomson Hall. I wrote at the time in my review:

“…a dark-hued spinto, beautiful, smooth and rich, with an impressive upper extension and agility. Her voice has excellent focus, and her stage presence is larger than life. In a striking gown and a very high hairdo topped with a chignon, she was every inch the diva.”

That just about sums it up for her return visit, this time to make her Toronto solo recital debut in the acoustically friendly Koerner Hall. The voice last evening was every bit as beautiful, used with musicality and discerning taste. And her stage persona was that of a diva, from the flourish of her cape to her fingertips. The only thing missing last evening was her chignon.

Let’s not forget her powerful sense of drama. With the audience awaiting the soprano’s arrival on stage, the house lights suddenly went out. We all thought, “Uh oh, what’s happening?!” No, there was no power failure. It was turned off to allow Gerzmava to make a grand entrance in her stunning outfit complete with cape, already facing the audience when the lights came back on.

She opened with four groups of Russian songs, beginning with Glinka. It took her a very short time to warm up, and after that she was marvelous. One is struck by the beauty and purity of her timbre, its rich, smooth, and beautiful qualities. Her vibrato is on the fast side in high fortes but completely unobtrusive, unlike many Slavic voices.

Russians songs do tend to be sad and often composed in the minor key — it seems that even the happy ones are somewhat melancholic, as if the collective soul of the Russian people is laid bare. Gerzmava sang like these pieces are in her DNA. Among the Russian songs, I was more familiar with the Rachmaninoff group, especially Lilacs, Op. 21, No. 2. I first heard Elisabeth Söderström sing this in Toronto over thirty years ago, and it left an indelible impression on me:

In life, only one happiness / it was fated for me to discover / and that happiness lives in the lilacs / in the green boughs / in the fragrant bunches / my poor happiness blossoms.

The smooth-as-silk vocalism of Gerzmava in this song was marvelous — I thought I could smell the lilacs — well, almost. It would have been perfect if my favourite Rachmaninoff song, Spring Waters, was on the program, but it was not. Oh well, there’s always next time!

If I were to quibble — why no translations of song text? To be sure, most of the audience members were Russian speakers, but what about the rest of us poor souls? While I’m at it, there was far too much extraneous applause. I don’t think it’s elitist to say that one should refrain from clapping between the aria and the cabaletta of both Anna Bolena and Norma, which continued even when the pianist raised her hand to ask the offenders to stop.

The second half consisted of high voltage opera arias alternating with French art songs — a clever bit of programming. The soft, ethereal French chansons — which she sang exquisitely — allow the singer a respite from the Italian barnburners of Donizetti, Verdi, and Bellini. Gerzmava opened with the long scena from Donizetti’s Anna Bolena. It’s the best part of the opera, as Anna is preparing to have her head chopped off. While Gerzmava never gave the impression that she was going to lose her head, everything else was there.

In “Pace, pace” from Forza, her smooth vocalism was very much in evidence, and she could summon up plenty of drama, as in the climactic high B at the end, which she held impressively. True, her pianissimo B-flat wasn’t the softest on record, but she made up for it with dramatic urgency. Brava! The pièce de résistance for me was “Casta Diva” from Norma, aria proper plus cabaletta, a real test piece for the dramatic coloratura soprano voice.

Her wonderfully serene opening slowly built to repeated high A’s followed by the B-flat, before the descent, one of the most sublime melodies in Italian bel canto. Gerzmava sang the high A’s as a single “attack,” which is non-traditional and not to everyone’s taste. Surprisingly, she also did it with a couple of extra breaths. Elsewhere in the cabaletta, her runs and coloratura in general weren’t quite impeccable, but given the size of her voice and its dramatic weightiness, it remained an impressive showing.

As you can imagine, by now she had the audience eating out of her hand. The ovations were endless, including many bouquets as is the typical Russian tradition. By the way, one audience member couldn’t wait to the end and went to the front of the stage to hand her a bouquet — fifteen minutes after the start of the show and in between songs! In my nearly six decades of attending concerts, this was a first.

Through it all, pianist Ekaterina Ganelina was rock solid, not to mention impeccable, showing off her excellent technique but never taking the spotlight from the singer. By then, the audience with its rhythmic applause brought the artists back again and again. Gerzmava’s first encore was the Neapolitan song “Non ti scordar di me” by Ernesto de Curtis. With that kind of superb vocalism, she has no fear of being forgotten!

She then sang two Russian songs unknown to me. I was particularly taken by the second song, in a cabaret-operetta style. The Russians in the audience were really responding to the songs. I will endeavour to find out the details and amend it here. It was a wonderful end to an evening of vocalism by one of the most beautiful voices in front of the public today. Let’s hope the Show One Impresaria Extraordinaire, Svetlana Dvoretsky, will bring her back to Toronto.