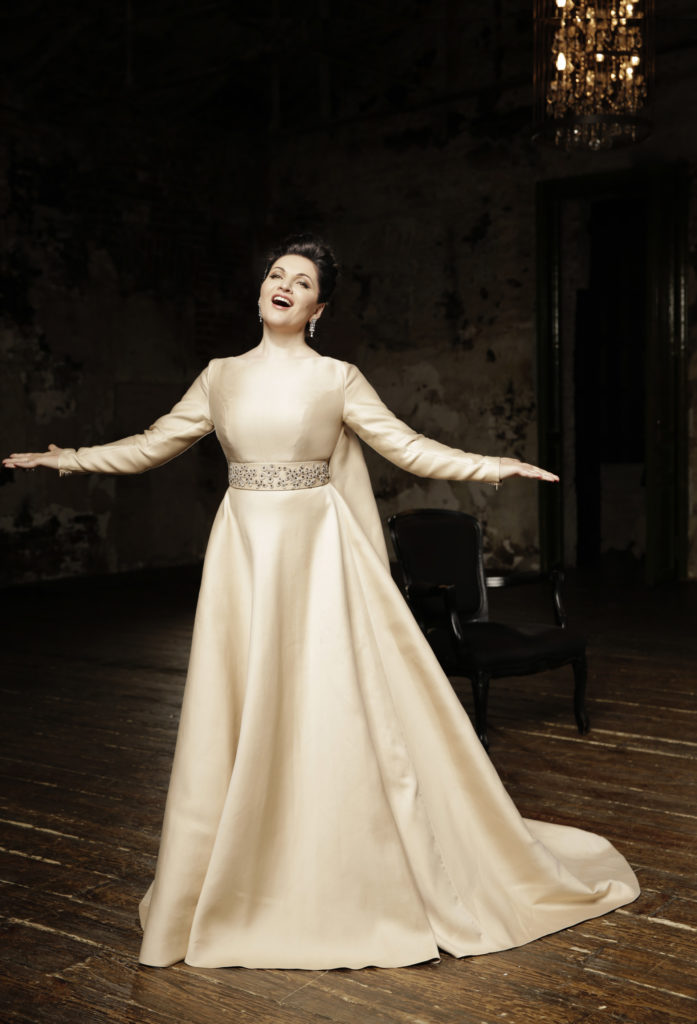 Abkhazian soprano Hibla Gerzmava stunned Toronto critics and the audience when in 2017 she made her first Canadian appearance, with the Moscow Virtuosi and Maestro Vladimir Spivakov.

Highly acclaimed for such leading roles as Leonora in La Forza del Destino, Desdemona in Otello, Liu in Turandot, and the title roles of Anna Bolena and Aida, Gerzmava regularly appears at La Scala, Covent Garden, the Mariinsky Theatre, Opéra National de Paris, the Metropolitan Opera, and opera houses in Vienna, Rome and Madrid among other major theatres.

Hibla Gerzmava comes here as part of her world recital tour where Toronto is the only Canadian stop which comes after Carnegie Hall.

“Dark-hued spinto, beautiful, smooth and rich,….and her stage presence is larger than life….. “The audience absolutely adored her,” – Joseph So, Musical Toronto

“…Power, dexterity and dramatic fervour…. Her voice floated over the top A flat with the poetic splendour of a nightingale.” – David Richards, Toronto Concert Reviews.

In the Abkhaz language, Hibla means ‘golden-eyed’, and Hibla’s most precious gift is the one that has captivated millions of listeners – the gift of her golden voice.

Hibla Gerzmava is one of the most sought-after opera stars in the world, and one of this generation’s few Russian singers who truly live up to the title of an ‘opera diva’. A national artist of both the Russian Federation and the Republic of Abkhazia, Hibla is a unique phenomenon on the Russian opera stage. With a voice that’s bright and direct, emotional and passionate, she performs leading female parts in a wide repertoire of celebrated operas. She is also a gifted actress, enhancing the insights of production directors with her own deep and intuitive understanding of character.

Hibla Gerzmava is soloist at the Moscow Academic Music Theatre of Stanislavsky and Nemirovich-Danchenko, and a highly sought-after guest soloist at leading opera houses worldwide, including the Mariinsky Theatre, London’s Covent Garden, the Metropolitan Opera in New York, the Bavarian State Opera in Munich, and opera houses in Vienna, Paris and Rome. She has performed with such outstanding musicians and conductors as Lorin Maazel, Antonio Pappano, Marco Armilyato, Adam Fischer, Irzhe Belohlávek, Vladimir Spivakov, Valery Gergiev, Alexander Rudin, Mikhail Pletnev, Vladimir Fedoseyev, Basil Sinai, and many others. In February 2014 she took part in the closing ceremony of the Winter Olympics in Sochi, performing the final song Olympic Waltz, accompanied by the Mariinsky Theatre Symphony Orchestra under the direction of Valery Gergiev.

Hibla Gerzmava is a Grand Prix winner at the Tchaikovsky International Competition, the first and only time in the competition’s history that the highest prize has been awarded to a vocalist. She is the winner of the Golden Orpheus Theatre Award and the Casta Diva Prize in the Best Singer category, the Russian National Theatre Award Golden Mask, as well as the Moscow Prize in literature and art. She is also a first prize winner of the Triumph award for the highest achievement in art and literature.

In 2015, she debuted at the Metropolitan Opera in New York, with the role of Antonia in Jacques Offenbach’s opera The Tales of Hoffmann. She returned to the Met in September to sing the part of Liu in Puccini’s Turandot, and in April 2016 as Desdemona in Verdi’s Othello.

Also in 2015, Hibla performed the role of Médée in Luigi Cherubini’s eponymous opera, at the Moscow première at the Stanislavski and Nemirovich-Danchenko Music Theatre, and returned to Vienna for a series of performances as Donna Anna in Mozart’s Don Giovanni.

Hibla made her debut on the stage of Carnegie Hall in 2016, with a solo recital program of romances and famous arias. That year she also debuted on the stage of the Bolshoi Theater in the title role of Elizabeth Valois (“Don Carlos” J. Verdi), and in 2017 she performed this part in the new production by noted director Krzysztof Warlikowski at the celebrated Paris National Opera.

In 2017, Hibla Gerzmava successfully performed her long-anticipated debut at the legendary La Scala Theater in the role of Anna Bolena in the eponymous opera by G. Donizetti. In 2018, Hibla made her debut at the Dresden State Opera House as Desdemona. Later that season, she performed the title role of Leonora on the Zurich Opera stage, in a new production of the opera “La Forza del Destino” by G. Verdi, directed by Andreas Homoki.

Hibla tours with recitals on the most prestigious stages in France, Austria, Germany, Belgium, Holland, Greece, Spain, USA, Japan, Sweden, Switzerland and throughout Russia. In June 2017, as part of the Cherry Orchard Festival, Ms. Gerzmava, along with Maestro Vladimir Spivakov and the Moscow Virtuosi State Chamber Orchestra, toured North America, performing on some of the most renowned stages in the country.

In 2019, Hibla Gerzmava will return to the Paris National Opera as Desdemona in “Othello” by G. Verdi and will debut in the new production of Verdi’a “Troubadour” on the stage of the Madrid Royal Theater. In 2020, she returns to the Metropolitan Opera as Liu in “Turandot” by G. Puccini. Later that season, at the Metropolitan Opera, she will be performing the title role in a new production of “Aida” by G. Verdi.

Besides a busy operatic career, Hibla developed a unique project of her own – a crossover concert program titled ‘Opera Jazz Blues,’ featuring the Yakov Okun Trio – in which she brings together classical singing styles with jazz improvisation, performing original and highly distinctive interpretations of music by a wide range of composers including Handel, Mozart, Puccini, Verdi, Donizetti and Gershwin.