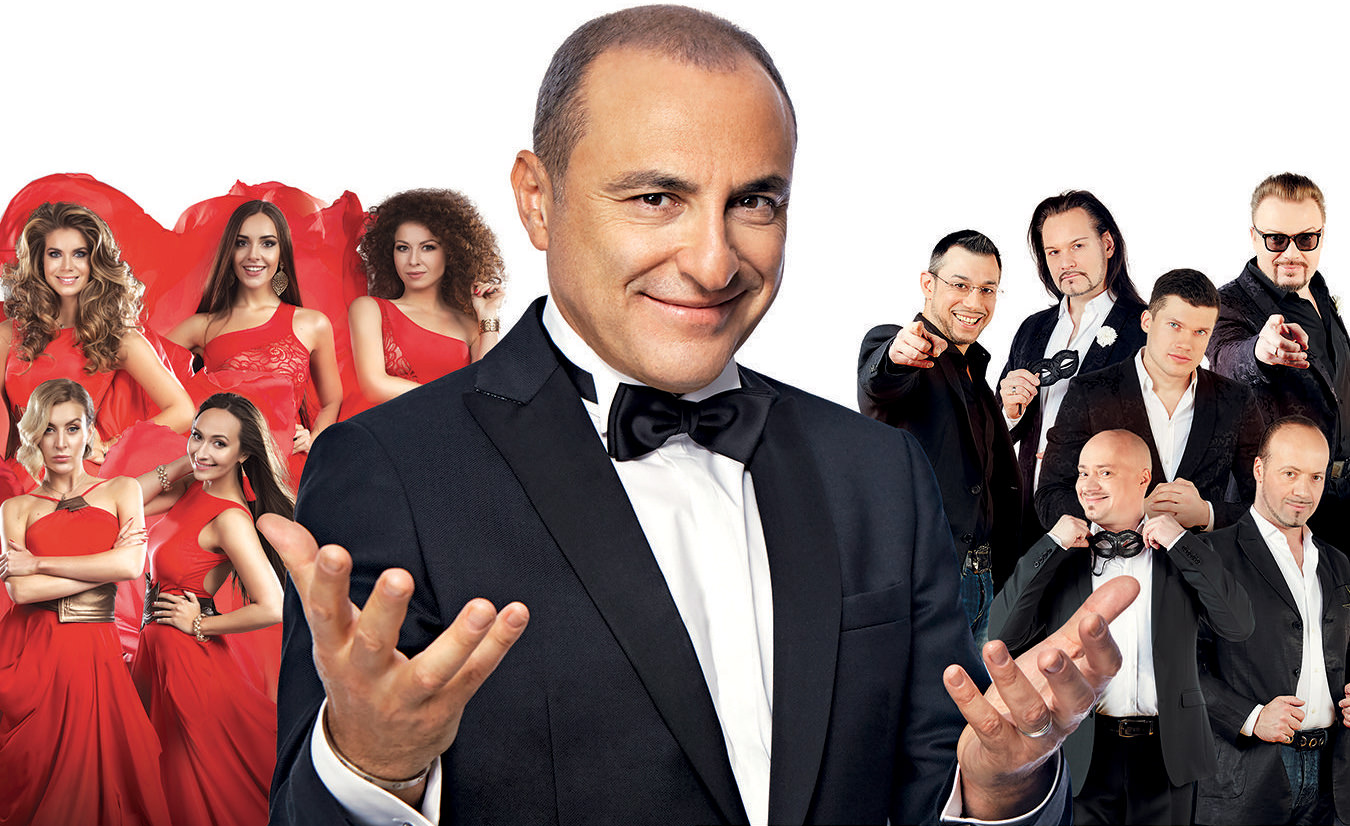 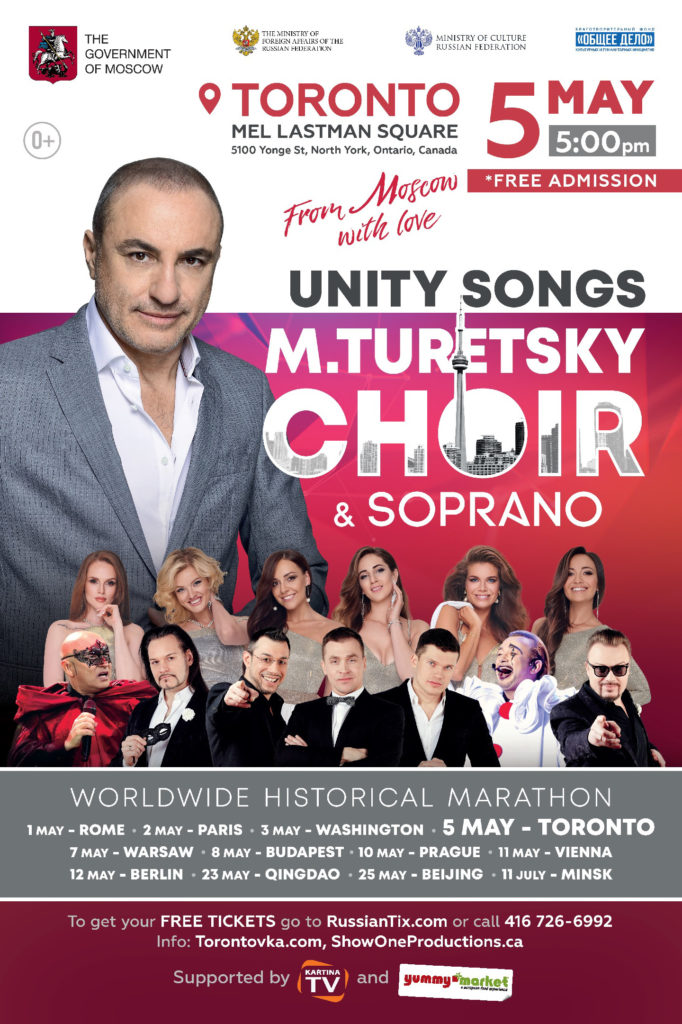 First in TORONTO
UNITY SONGS: PROJECT THAT UNITE CAPITALS OF THE WORLD

from Paris and Berlin to Washington and Beijing

From May 1 to May 12 famous Russian groups M.Turetsky Choir and SOPRANO will perform at central city squares in 12 countries of the world. From Paris to New York, from Berlin to Toronto, from Moscow to Beijing, the uniting songs that keep memory and history of 5 generations will be heard. At its core, the program uses music to unite humanity by highlighting men’s striving towards peace and love in times of temporal differences and strife.

In 2018 M.Turetsky Choir and SOPRANO presented “UNITY SONGS” in 8 countries – including the U.S., Israel, France, Germany, Austria, Russia, Slovenia and Belarus! This year the unique musical promo will take place in 12 countries on 2 continents.

In particular, in Canada this project will take place for the first time. So, on May 5 in Toronto, songs about peace, feat and love will sound on the Mel Lastman Square (5100 Yonge St, North York, Ontario, Canada). Start at 5 pm. Invitations (for free) are available at RussianTix.com, additional information at 416.726.6992, Torontovka.com and ShowOneProductions.ca (supported by KartinaTV and Yummy Market).

This spring, “UNITY SONGS” also will be heard for the first time by residents of Rome, Washington, Warsaw, Budapest, Prague, Beijing, Qingdao and will be returning to Berlin, Vienna, Paris, New York, Moscow and Minsk. These songs, written in the years of World War II, remind us of what is really important: love, honor, friendship, devotion and peace. Peace, which is more valuable and more important than any timeframes and disagreements.

“The Unity Songs project is not just the words set to music. It is our history, our memory. The marathon purpose is to unite people and to preserve this fragile peace through music”, – MIKHAIL TURETSKY, the People’s artist of Russia, founder and producer of “M.Turetsky Choir”, SOPRANO.

“UNITY SONGS” project is founded by the Government of Moscow and is organized annually with assistance of the Ministry of Foreign Affairs and the Ministry of Culture of the Russian Federation.

REFERENCE:
Project “UNITY SONGS” has started in Moscow in 2015, later in 2017 it gained international character and was successfully presented at Berlin’s central square. In 2018 the project turned into the whole historical marathon – in 10 days “UNITY SONGS” were sung in 8 countries of the world. In five years of its existence, the project broke several records: the debut on Poklonnaya Hill. in Moscow brought together 150,000 viewers. Online broadcast of 2017 from the concert on Zhandarmenmarkt in Berlin was viewed by more than 8 million people. The New York State Senator Luis R.Sepulveda mentioned that the project “UNITY SONGS” is international sensation combining songs about peace love and heroism. The project bears historical significance and develops friendship.

M.TURETSKY CHOIR – the first art-group in the world under the direction of People’s Artist of Russia Mikhail Turetsky. A musical phenomenon of the XXI century, the synergy of the unique vocal possibilities of acting and the extraordinary charisma of soloists. The group consists of 10 soloist – men with unique voices in the diapason of four and a half octaves. They are more than 28 years on stage. The best choice of songs, incredible energy, exceptional format and only live music. The artists have no boundaries repertory – from world classic to rock, from pop to opera, from jazz to folk hits. In Russia, they are called champions of popularity: more than 8000 appearances on stage, all concerts are always sold out, 1000 musical compositions in the repertoire.

SOPRANO is a unique art group, which combines all existing female singing voices from the highest (soprano) to the lowest (mezzo). Each soloist has her own singing style: from academic to folk and pop-jazz. All participants have higher professional musical and acting education.

All concerts of both groups are performed only live, with the artists singing in different languages (Russian, English, Italian, French, Chinese, etc.). The artists not only sing but also play different musical instruments (violin, saxophone, keyboards).The group sings a cappella and with instrumental accompaniment (piano, guitar, drums). The groups go on annual concert tours in Russia and abroad (USA, Canada, Switzerland, Israel, Germany, Kazakhstan, China etc.), perform in prestigious concert halls, made a number of music videos, and has gained people’s love and respect.