Immersive Van Gogh exhibit — which sold over 200,000 tickets in a pandemic — set to open for a second round

When COVID-19 turned Toronto and the rest of the world into a cultural and entertainment wasteland last March, there was one bright spot in the city called “Immersive Van Gogh,” which opened on July 1 as both a walk-in exhibit and — in a world-first — an indoor drive-in exhibit.

Before closing late last year, the two exhibits combined sold 200,000 tickets, making it almost certainly the top-selling cultural event of 2020 in North America at a time when virtually all museums, galleries, and live theatre venues were shuttered.

“It was a surprise. It was very exciting on one side and a little bit sad on the other side. We were the top-selling attraction both because we did a great job of selling tickets but also because so many other things weren’t open,” said Corey Ross of Starvox Entertainment who, along with Svetlana Dvoretsky of Show One Productions, created Lighthouse Immersive, the company behind the exhibits.

“I don’t think it would be easy to find any other art exhibit that was actually operational during that time,” Dvoretsky added.

Ticketmaster has told the company privately that “Immersive Van Gogh” was the top-selling cultural event in North America last year, Ross said, but Ticketmaster has declined to confirm it publicly.

“Gogh by Car,” the drive-in exhibit is slated to reopen on Feb. 22 while Ross and Dvoretsky are hoping to reopen the walk-in exhibit on March 5, along with a new show also at 1 Yonge St. called “Illusionarium,” an exhibit chronicling the history of magic involving both live magicians and a combination of video, holographs, and special effects.

Ross calls Lighthouse’s works “experiential entertainment” while Dvoretsky calls it “immersive experience.” Both agree that this new cultural form of entertainment is here to stay. They’ve just opened “Immersive Van Gogh” in Chicago and is slated to open in March in San Francisco, with other cities like Los Angeles on the horizon.

“At the end of the day, this is really a new way of encountering art,” Ross said. 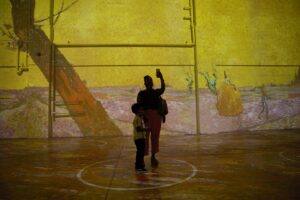 “It’s a tough one to explain what you’re going to experience until you’ve come through and done it because it’s such a new medium. But it sits somewhere at the crossroads of filmmaking, art exhibit, and experiential shows,” he added.

The 35-minute van Gogh walk-in exhibit features 52 projectors in its 17,000-cubic-metre space which project images onto the walls and floor accompanied by a soundtrack. The indoor drive-in show can accommodate 15 cars at a time in a slightly smaller space, with both galleries occupying space that once housed the Toronto Star’s printing presses.

The indoor drive-in, which was Ross’s idea, attracted media attention from around the world, including CNN, BBC and NPR (National Public Radio). Ross was even more pleased that when the Ontario government announced guidelines for reopening the province last year, there was a specific regulation for indoor drive-ins.

“I nearly fell out of my chair when I saw that … the only drive-in exhibit in the world is ours — this crazy idea I’d come up with — and here we have a government regulation passed to legalize it,” Ross said.

In fact, both walk-in and drive-in exhibits were developed last year at a time when the pandemic was just beginning and there was almost no guidance about how to operate safely from governments at any level. 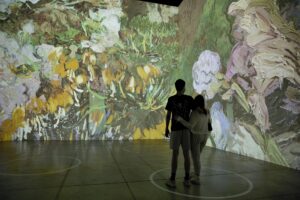 “Nobody knew anything at the time. It was even before people were talking about masks. There was no information, there were no protocols, there was nobody in the city or provincial government to tell us (what) was safe,” Ross recalled.

So Lighthouse purchased 40,000 masks, set up a system of social distancing circles in the walk-in gallery, and explored all kinds of technology from around the world — including a disinfectant-dispensing robot from China, which didn’t work out — to ensure audience safety.

“We came up with a system that works, that got 200,000 people through social distancing and wearing masks safely without any COVID-19 outbreaks in our exhibit. But it certainly was trial and error. Because of that, a lot of the other theatres and venues across North America have been calling us to ask ‘what did you do, how did you figure it out?’ ” Ross said.

“We worked around the clock in order to come up with a case scenario where we can actually receive the audience,” Dvoretsky said, noting the decision last April to invest in a new set of projectors and create a new space for a drive-in audience wasn’t an easy one.

“The decision to invest in another set of projectors and build another gallery in the middle of all of this, that was a very difficult decision to make. But we really believe in this,” she added. 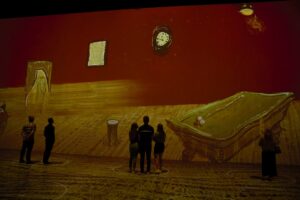 Ross said that while other artists and producers have sought to attract audiences with concepts like outdoor concerts at drive-in theatres and live theatre via Zoom, the immersive exhibit experience the company has created is the most successful and will likely endure.

“This kind of concept never would have existed without the pandemic,” Ross said.

Dvoretsky noted that the largest demographic to the van Gogh exhibits was the 25-to-42 age bracket, which is “very different from the museum audience and the traditional theatre audience.

“I’m sure it’s going to be very successful even once COVID is over,” she said.