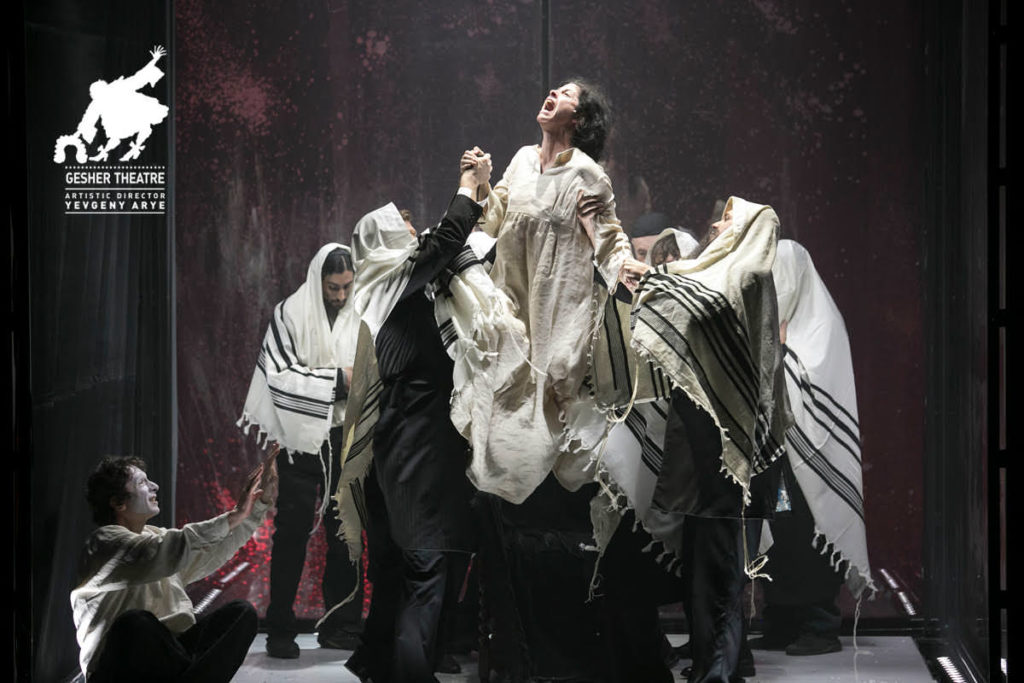 Show One Productions presents the North American premiere of Gesher Theatre’s production of The Dybbuk, or Between Two Worlds, inspired by S. Ansky and adapted by Roy Chen. Directed by Gesher Theatre founder/AD Yevgeny Arye, The Dybbuk is in Toronto for a two-performance run at the Elgin Theatre. Performed in Hebrew with English and Russian surtitles, The Dybbuk is a remarkable combination of comedy and tragedy, mysticism and pragmatism; love turns to possession and the world of these people—living and dead—will never be the same.

When we first meet Khanan (Israel [Sasha] Demidov), he is up on the roof of the synagogue praying alone while the other men pray together below; it is here, during his practice of Kabbalah that he reaches out to the Almighty and confesses his love for childhood friend Leah (Efrat Ben-Tzur). But when Leah’s wealthy merchant father Sender (Doron Tavori) bursts into the synagogue with news, we learn that she has been promised to Menashe (Ori Yaniv), the son of another rich man. Khanan disputes the match and asks for Leah’s hand, a request that is met with rebuke and derision. An orphan misfit, labelled “gimp” and crazy by the other men, Khanan is roughly thrown out of the synagogue.

With his dying breath, Khanan asks the Almighty for forgiveness, but to not be separated from Leah. The dead of the community, including the ghost of Leah’s mother Hanna (Neta Shpigelman) take him in to their fold. Determined to marry Leah, Khanan hatches a plan to disrupt the wedding by possessing Leah as a dybbuk (a restless spirit). Recognizing the spirit that’s possessed her, Leah is torn by her love for Khanan and the impossible torment of being with him under these conditions. When her grandmother Frieda’s (Fira Kanter) traditional remedies fail, the family takes her to Rabbi Azriel (Gilad Kletter) for an exorcism. Revelations and dark family secrets emerge during the battle for Leah’s soul. In the end, both Leah and Khanan realize they can’t be together like this, in this in between world, and they both have some difficult choices to make.

Stunning design and riveting performances make for a compelling journey into this world of the living and the dead—and the space in between. The tight staging incorporates traditional ritual, daily life and the thin veil that separates the living from the dead—infused with an air of supernatural mystery, playfulness and even a bit of irreverence. The stage (set design by Simon Pastukh and lighting design by Igor Kapustin) is dominated by a luminous orb of a moon upstage right and a transparent box-like playing area stage left, highlighting the thin boundary between this life and the next. The accompanying music (Avi Benjamin) and sound design (Michael Vaisburd) complement the otherworldly environment, with snatches of opera; haunting biblical trumpet bursts; and the warm familiar tunes of home from the fiddler (Boris Portnoy). The costuming (Stephanie Graurogkayte) combines early 1900s period apparel with traditional Jewish ceremonial garments; and the dead are differentiated from the living by their white faces, the white makeup ritualistically applied to the newly dead by one of the veteran women dead. 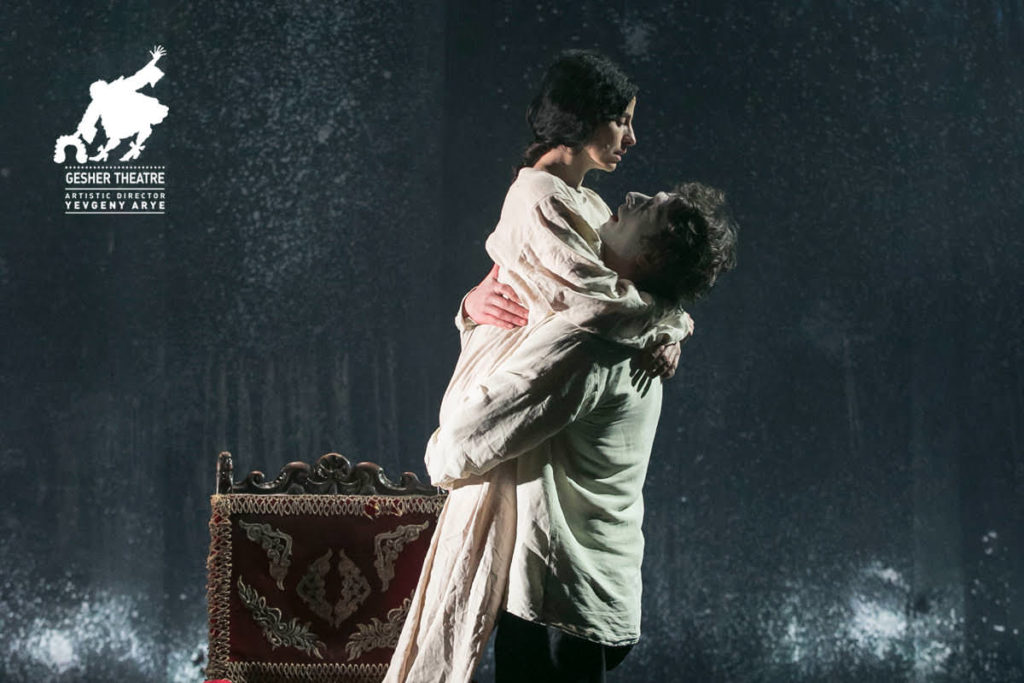 Stand-out performances from Demidov and Ben-Tzur, who have lovely chemistry as the conflicted Khanan and Leah. Longing to connect with the Almighty, Khanan also has a deep, earthly desire for Leah; and Leah, viewed as an old maid, struggles with doing what her family expects of her and the call of her own heart—and both must come to terms with the difference between love and possession. Tavori is both menacing and comical as the gravel-voiced, proud and brutish Sender. Try as Sender might to tell the world—and himself—that he only wants what’s best for his only daughter, even he must admit that he had ulterior motives for thwarting the match between Khanan and Leah. Kanter gives Frieda, Leah’s grandmother, a feisty pragmatic edge; deeply ensconced in the old ways, peppered with superstition and a belief in magic, Frieda is the guiding female hand in Leah’s life—preparing her for marriage and ultimately the most broken-hearted as revelations emerge during the exorcism.

Shpigelman is a heart-wrenching picture of love and strength as Hanna’s ghost; heartbroken at having died so young and leaving Leah without a mother, Hanna watches and protects from beyond—her daughter’s possession giving them a brief chance to connect across worlds. And Alexander Senderovich and Natasha Manor supply some much needed comic relief as the ghosts of the Watchmaker Baruch and his wife Rochelle. 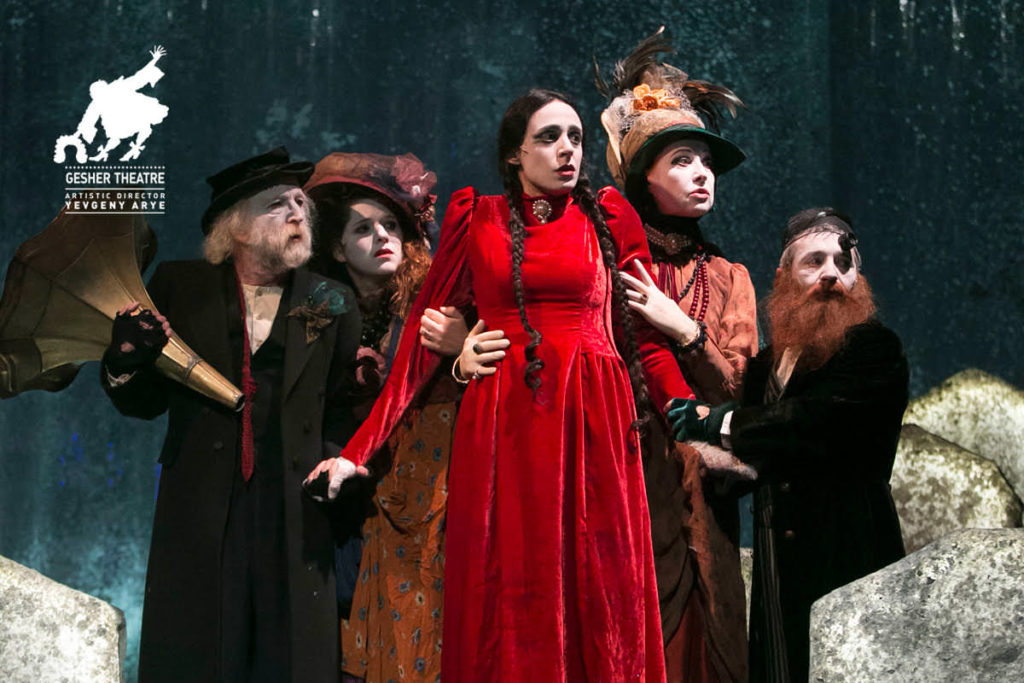 Going from her father’s house to her husband’s house, a woman in this time and place has little agency over her own life and body; and deeply professed love can easily turn to selfish possession. To varying degrees, this power dynamic between men and women still exists today—and in the face of overwhelming odds, women are still fighting and making hard choices in order to take control of their own future.