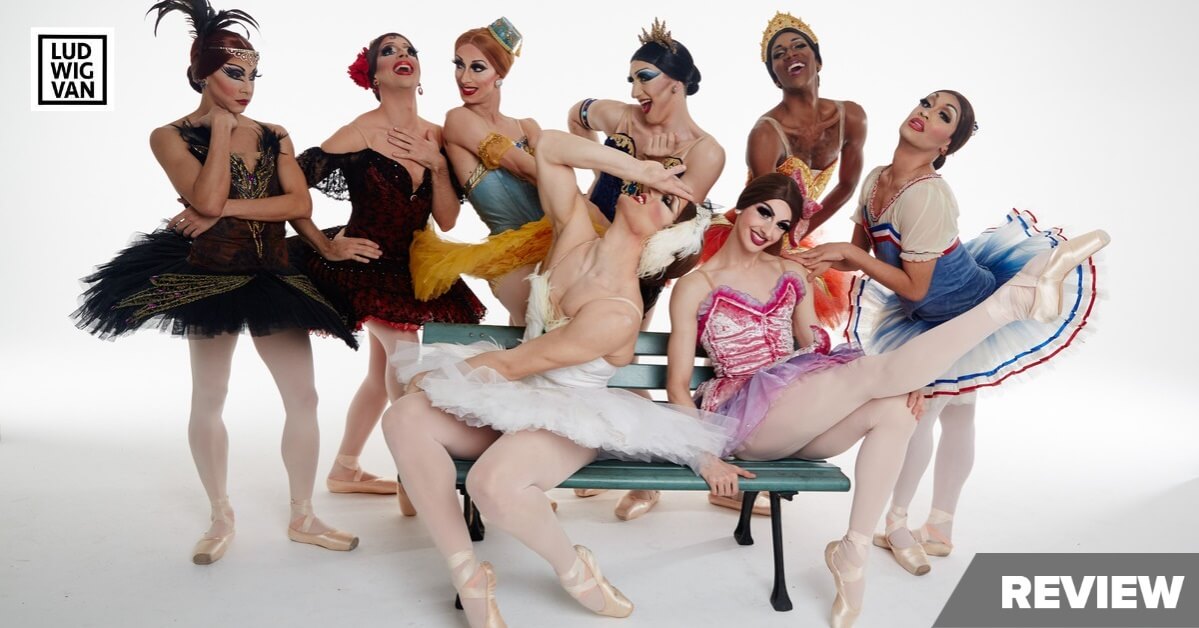 “The Trocks Are Back in Town!” That of course is a reference to the all-male ballet troupe Les Ballets Trockadero de Monte Carlo. Founded in 1974, it’s now “of a certain age,” but remains scintillating as ever. Over the last 46 years, dancers have retired while new ones have joined, but their raison d’etre has remained the same — dazzling audiences with an inimitable mix of balletic virtuosity and over-the-top comedy with an emphasis on high camp, a formula that has worked well.

Based on audience reactions last evening, this tried-and-true formula remains as successful as ever. The sold-out Winter Garden had a festive atmosphere, and the audience really whooped it up, especially the younger people in the audience. Perhaps it’s a bit of a novelty for those who have not seen the Trocks before. To the old fogeys in the audience — and I include yours truly — it’s nothing new.

A slight diversion — the idea of men performing as women has a long history, as old as theatre and musical performance. From Baroque opera and the Italian castrati to Shakespeare and the hwa dan of Chinese Opera, women were not allowed to perform on stage and men took their place. In fact, in Chinese Operas and Japanese Kabuki theatre, part of this tradition continues to this day! These were (are) serious performances and in no way meant to be “camp.” Doing it for laughs — modern drag — is a much more recent phenomenon.

According to academic/author Selby Schwartz, drag today in clubs, theatres, and films are comedic routines but it goes deeper. Dance is the “obvious medium for questions about the body; its capacity for expression, its ability to be both natural and intensely controlled, its changeable visual identities. Gender identity also accrues to the body in layers, and each layer can be chosen deliberately. As drag queen RuPaul has famously said about models, “Look, you’re born naked and all the rest is drag.””

I caught the last of three Trockadero performances yesterday, brought to Toronto under the auspices of Russian impresario Svetlana Dvoretsky of Show One Productions. A voice came on just before curtain — in an extravagant Russian accent — rattling off a string of names, to say that there would be cast changes. Given that the troupe had just performed an afternoon show, it was totally understandable. But it also meant that I cannot be sure who danced. In addition, the name of the modern piece was not specified in the program.

No matter. What I did see was vintage Trockadero. It opened with Swan Lake Act 2, their signature routine. Even though I had not seen them live in something like 20 years, it brought back memories! It combined serious dancing with moments of well-placed hilarity, through odd, out of character hand and body gestures. It certainly had the desired effect on many in the audience.

That said, the laughter was perhaps not as vociferous as I had expected, especially in the beginning. Perhaps we Canucks are an overly-polite bunch. Personally, I was more interested in the bravura balletic skills exhibited than in the slapstick antics. I dare say the majority of the audience felt the same, as the routines that exhibited the most balletic virtuosity received the biggest ovations.

The Pas de Quatre, another signature Trockadero bon-bon, was delightfully rendered, with each Trock dames assuming vivid impersonation of the four historical ballet divas — Grisi, Taglioni, Cerrito, and Grahn — complete with hilarious competitive fervor. There was a modern piece with a very tall ballerina and a short danseur — too bad I don’t know their names. They were both brilliant and fully deserving of their huge ovation.

Arguably the highlight of the evening was the appearance of Canadian dancer Brooke Lynn Hytes, aka Vanya Verikosa. She was billed as the “Uninvited Guest.” Hytes was a Trock member from 2008 to 2012, before leaving to do drag full-time with RuPaul Drag Race. Here, she danced the famous Dying Swan to the fabulously familiar music by Saint-Saens to perfection. Hytes received the loudest and most sustained ovations of the evening up to that point.

The Grand Finale was the “Walpurgisnacht” — a balletic sequence from Gounod’s Faust. In the opera house, this ballet is almost always cut, mostly to save money by the opera company. But in the opera company’s defence, this spectacle really doesn’t serve to advance the story. It’s there merely because Faust is your typical French Grand Opera. In fact, Faust being such a long opera, I never regret this segment being cut.

However, in a dance show, it has wonderful moments to show off the dancers. It represented Les Ballets Trockadero de Monte Carlo at its estimable best. The whole company took turns in the divertissement, combining bravura dancing — nearly no sign of fatigue in evidence — with the obligatory comedic antics. The audience lapped it all up. The troupe earned a thunderous ovation, and the audience was rewarded with a short encore, a Mexican number set to a very popular tune. The whole evening was short and sweet — with two brief intermissions, it lasted two very satisfying hours. The audience left with a smile on its collective face.

UPDATE:   Well!  It appears that the joke is on me!  In my review, I mentioned about the cast change announcements at the beginning of the show. I assumed it was the dancers becoming too fatigued to do two shows in a day.  I just heard back from Ms. Ella Batten, the Show One publicist. She says all the announcements were part of the comic routine!  Sure fooled me!  She also told me the modern piece was Tarantella.