SCRUTINY | Mariinsky Orchestra Invades Toronto In A Night To Remember 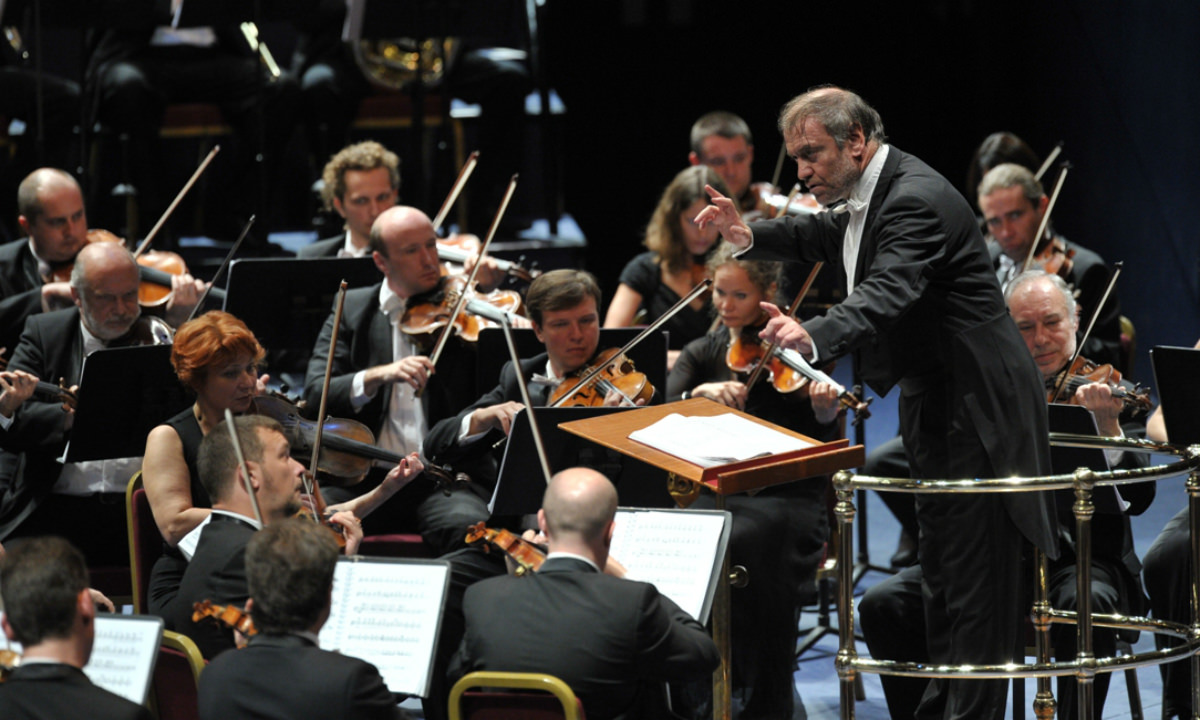 Many of us had waited for months anticipating conductor Valery Gergiev’s return to Roy Thomson Hall Friday night to pilot the sleek-engined Mariinsky Orchestra through an all-Russian program.  Gergiev is not only arguably the foremost Russian conductor of our time, with absolute power in St. Petersburg over all three major artistic venues (symphony, opera and ballet), he is also considered by many, rightly or wrongly, to be the premier interpreter of all Russian orchestral and ballet repertoire, traversing continents with no end in sight to his many tours, festivals and recording projects.  (For more commentary, see Paul E. Robinson’s lucid comments on Gergiev’s egregious schedule and one of his latest recordings).

Gergiev and the finely-toned, muscular Mariinsky Orchestra buzzed into town on an impressive, compressed tour that has already taken them from LA and Chicago to Toronto with a stop Saturday in Montreal and then on to New York — and that’s only naming a few of the destinations this orchestra plays on their just-under-three-week North American sojourn.

As a tremendous bonus, Denis Matsuev, the 11th International Tchaikovsky Competition winner (1998), was along for the ride and torched the hall with an absolutely stunning Prokofiev Piano Concerto no. 2 in G Minor, but more on that later.  Gergiev’s conducting and Matsuev’s playing comprised the main story Friday night.

The Mariinsky Orchestra is touring three concert line-ups, and we drew the Shostakovich Symphony 9 — Prokofiev Piano Concert No. 2 — Scriabin Symphony 3 program.  The Scriabin performance was mesmerizing for its textured, forward-moving, narrative power.  It was a highlight for many, and for my part, I was interested most in hearing this work on the program, given that Gergiev had recently completed his Scriabin Symphonies 1-4 recording project with the London Symphony Orchestra on the LSO Live label.

While his Scriabin project was an impressive accomplishment, it released to mixed reviews with accusations of sub-par motivation and an under-regard for the score.  Such commentary has dogged Gergiev for a while, yet we easily forget that the life of a busy touring and recording artist often consists of having to cope with such difficulties and performances live or recorded can be frequently marred by inconsistency.  It comes with the territory.

But, Gergiev has also toured the Scriabin symphonies across Europe to broad acclaim.  After last night’s second-half outing of the Symphony No. 3 in C Minor (”The Divine Poem”) one can hear why.  Here was a remarkable performance of the work, which frankly, lacks the concision of innovative motivic development we might prefer to hear in a Richard Strauss tone poem, yet when conducted well and with an orchestra showing nearly no signs of touring fatigue, can nevertheless deliver a satisfying account of the work.

Many called Scriabin’s sanity into question (such as Rimsky-Korsakov) over his declarations about the divine and the ecstatic. However, I think it pays to take the music at face value and assess it for the sound world it presents rather than attempting the impossible task of grasping the esoterica behind what, exactly, Scriabin thought he was conjuring up when he composed these works.

Gergiev allows us to do just that and with considerable success, in part giving us a glimmer of insight into Scriabin’s inner workings, but equally possibly, also creating a workable interpretation entirely independent of the composer’s intended context.

Some hail Scriabin 3 as a great under-rated symphony, but it isn’t.  Gergiev masterfully shows us why, Scriabin 3 is a serviceable, enjoyable piece, neatly constructed around two motives that are repeated from beginning to end.  The frequent trumpet call and brusque horn lines are handled supremely well with a spectrally modulated tone that was absolutely enviable.  The strings are everything you want to hear in a Russian orchestra:  smooth, creamy, never a rough edge or a brittle moment, the acme of disciplined lyricism and unique character, emotionally modulated to suit the phrase from the modest to the overpowering.

Simply put, it’s worth the price of admission to hear Mariinsky Orchestra’s unique sound complex in a live setting and not confined to a mere recording.  Scriabin 3 is a fine work, nothing more, but the key to it is to make the work sound more than what it is, which is just fine in itself.

In other words, the divine to which Scriabin alludes is best heard via Gergiev’s conducting and interpretive mastery over orchestral swell and dénouement, powerful harmonies and crucial structural moments, emotionally alternating back and forth between low and high points throughout.

While the music doesn’t sound particularly cosmic or transcendental; it’s very beautiful, cast in a wash of all the musical languages Scriabin knew at the beginning of the twentieth century, and when fused together, he imagined them into a composite loveliness.

The audience enthusiastically agreed last night: they had sold the place out and stood for the orchestra at concert’s end just as they had many other points throughout the concert.

But it was Matsuev who, for a time, stole the show right out from under Gergiev.  The brutal Prokofiev second piano concerto is unforgiving, some say to both performer and audience. Let’s dispense with this nonsense.  I love this concerto for its musical language, much of which summarizes some of the golden moments to be found in the composer’s intimate and virtuoso chamber music writing, as well as his larger concert works such as the concertos.  All are among my favourite musical works of the entire twentieth century.  I have grown tired of the put-downs, both upon the composer and this concerto.

Matsuev redeems this piece entirely with virtuoso passagework of explosive incandescence and contrarian moments of harmonic complexity and délicatesse.  He remained continually in perfect counterpoint with every orchestral colour throughout.  His bravura focus was admirable and he missed nothing.  If you sat close enough to see his arms, he gave the impression he had grown a third hand just for this performance.

Most impressive of all may have been his restoration of the killer five-minute cadenza at the end of the first movement which he subdued with an authority I have never seen before in this work.  I find that few can play this summit of the piano concerto repertoire, and fewer still with tonal command, moreover on a Steinway whose upper octave needed a retune (and that’s no one’s fault — it was just the nature of that particular piano in that space and at that time).

The famous ‘colossale’ and ‘tumultuoso’ sections seemed to lift Matsuev and the piano off the stage.  But it wasn’t all flash and flare, bombast and blare.  The Second Piano Concerto is a work of compositional sophistication, replete with bitonal chords, forward-looking harmonies, intimations of a futuristic sonic landscape and at the same time, a study in violent contrasts up and down the dynamic and emotional range.

In a way, the performance of Prokofiev 2 was the perfect calling card for Gergiev, Matsuev and company because it allowed them all to play as a composite, blended unit.  At times, the piano could sound like it was only another instrument in the orchestra, a direct nod to how Prokofiev himself heard many such harmonically blended passages in his own concertos.  Here was an appropriate tribute to the musicianship of all on stage, and to how well Matsuev and Gergiev could make such music mindfully and meaningfully for their audience.

And their reaction was instantaneous and overpowering in itself, and elicited the tour encore of Anatoly Liadov’s filamented solo Music Box, a silvery gem of ornamental beauty, but it was what happened after that surprised us all most. After the applause, Matsuev next nodded to a few of us, acknowledging what we all wanted — a second encore.  He produced the ripping Precipitato finale from the Prokofiev Sonata No. 7, a moto perpetuo nightmare and one of the most technically demanding movements in all the piano repertoire.  I guess the concerto hadn’t tired him out enough.  Energized, he produced a dramatic display of all the movement’s hidden, toccata-like colours.  It was outstanding.  Matsuev had virtually stolen the show.

The evening began with Shostakovich’s Symphony No. 9, a taut performance of subtlety and transparency, but by concert’s end, it had been eclipsed by so much memorable music as to be relegated to near-prelude status.  It was a fine, squeaky-clean interpretation nonetheless and took nothing of the work’s inherent sardonicism for granted.  It is not Shostakovich at his most mockworthy, but it is definitively a less-than-covert anti-authority statement couched in a wilfully distorted classicism which Gergiev laid bare for all it was worth and without overdoing it.  Gergiev reminded us how to truly listen to this work.

For all that has been written about the Ninth, its defiance in the face of Communist party demands that Shostakovich’s Ninth be a grand work like the other ‘Ninths’ that preceded, it has to be stated that the work is fundamentally satirical, not only against government taste in music and its incalculable limitedness during the Stalin era, but the work also mocks Neo-Classicism itself.

As such, this ‘anti-Ninth’ served aptly as a suitable aperitif to the quirkily calculated dissonances of the Prokofiev concerto, nicely rounding out the concert’s first half and overall, the evening’s splendid fare of unearthed, and smartly interpreted, Russian classic repertoire.