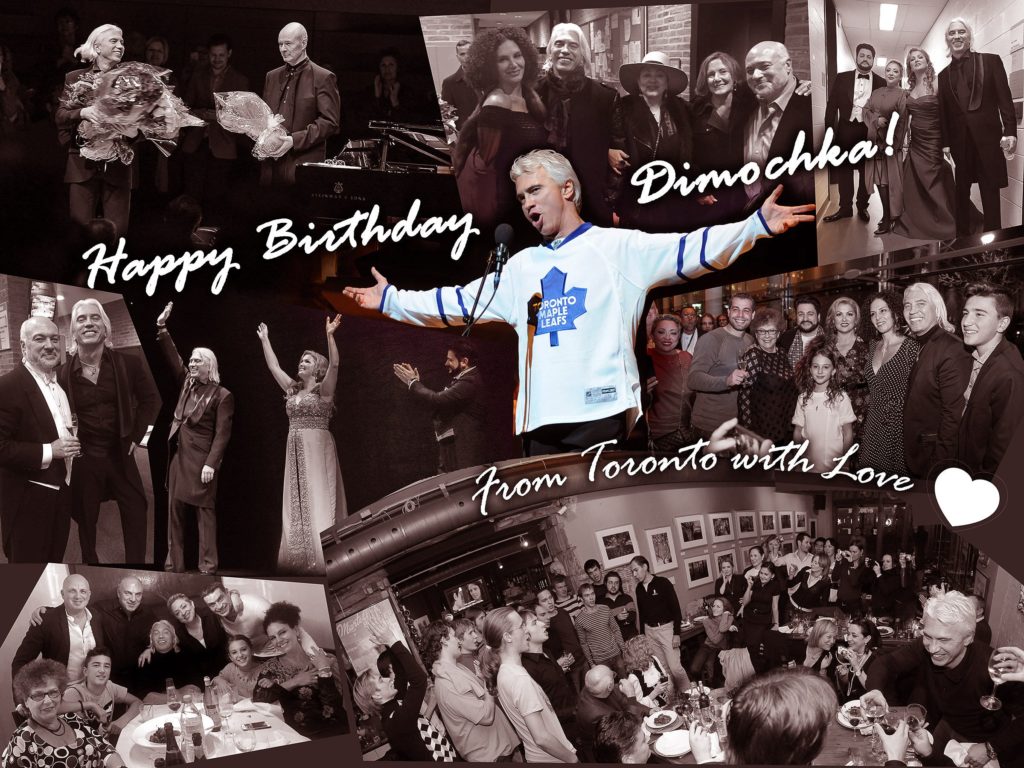 It has been two months since Dmitri Hvorostovsky is no longer with us, but it still hasn’t sunk in. It is just too hard to accept when a man of such physical and spiritual power and an instant smile on his face has left this world. The whole world knows him as an artist, but I was fortunate enough to know him as a human being and I want to share my thoughts and memories of him in that regard.

I have just returned from NYC, attending a special gathering organized by the Met Opera chair, Ann Ziff, for the artists, chorus members, stage hands, cleaners, ushers … basically everyone who works at the Met and wanted to come and raise a glass in Dima’s memory. The place was packed. And once again it reminded me how much Dima was loved by people, not just by his colleagues or opera connoisseurs but by the general public. He could connect with anyone … and he respected everyone, no matter their level of importance.

We first met in 2007 when I presented him in the War Songs project. I was trembling. He was a huge star already and I didn’t know what to expect. Also back then, I didn’t have much mileage dealing with stars of such calibre. But he made it so easy for me … it was a great first experience!

I remember how he wore a Maple Leaf jersey with his name on it, given to him by a friend the night before. He brought the jersey to the concert and tacked it near the stage. When I saw it and asked what it was for, he smiled and replied, “That’s my stage costume for tonight.” And he actually put it on for the encore! The audience went WILD!

It happened that the Toronto concert was the last one on a long 40-city world tour, and we took everyone, including the choir and orchestra, to a restaurant. In the middle of dinner, all the members of the choir and orchestra got up and sang to Dima – Mnogie Leta, a traditional Russian folk song that wishes someone a long life – Dima was so touched. I caught a tear on his face. He was a very humble man.

Now I understand that he crushed all the stereotypes of being a “star”. He was a truly deep, kind man, and he became quite philosophical towards to the end of his life … always thankful for everything he was able to achieve.

Within two years we had our next project here with Dima – Verdi arias with Sondra Radvanovsky. And there I saw the other side of him. We hired an orchestra from Montreal to accompany the tour (I am specifically not giving the name of the orchestra here) and when soloists arrived for the first rehearsal, the orchestra was not ready at all. Half of the scores were missing, as were some of the musicians. Dima stormed out of the room and said that either we find another orchestra or they have to get to work. Well… with having a first concert in three days and union musicians, it was not an easy time for me. I had to get into a lot of fights with the orchestra management in order to make things right (besides being totally embarrassed in front of my soloists). But Dmitri was absolutely right in his professional demands. He was a total perfectionist at his job.

Not everyone knows, but he practised EVERY DAY while he was sick and in treatment, and didn’t give up until almost his last days. He also pushed himself to exercise pretty much until the time he couldn’t walk anymore.

Incredible willpower prolonged his stage life for at least another year compared with his prognosis. He took every opportunity to be on stage during his illness whenever he could physically be there.

I recall him saying to me here in Toronto back in April 2017, “I don’t care if I am on stage in a wheelchair as long as I can sing. The moment I can’t, I am no longer interested in life.”

He also told me something which I will never forget, which was related to his last concert here in Toronto. He said, “You brought me back to life. Thank you.” Again, not many people know but Dima was in ICU for almost a month in December 2016. It happened in St. Petersburg. After his concert, he was taken to hospital with a terrible, very dangerous form of pneumonia. He had a huge hole in his lungs. Doctors were in awe that he was able to beat it, but he couldn’t sing for almost four months, and only started to sing a few weeks before his Toronto concert in April. One can only imagine what we went through as no one knew or could predict if Dima would be able to perform or not. We were all very nervous including Anna and Yusif and Mark Hildrew (Dima’s manager) … Everyone… But the internal power of this man was above and beyond any imagination.

He flew here with the whole family – Florence, Max, Nina and Illi (his mother-in-law), but he was already in a wheelchair.

Next day was the first rehearsal. He was nervous but he sounded beautiful! After the third aria, once he felt comfortable with the orchestra and his voice, he said “I am sorry we are done now – this is my first time singing after a four-month break and I need to be cautious.” One cannot imagine how much effort he put into going on stage that night … and it was a triumph!

Lots of people were here from all over the world including the top people from the Met. After such success in Toronto, Peter Gelb spoke to Dima and decided that he would go to NYC to participate in the Met gala two weeks later. He made a surprise appearance and the audience went wild!

I went to see Dima on his birthday on October 16 … I was at his house and it was the last time. It was apparent that he was struggling with his speech and couldn’t walk at all. But despite all, he was extremely happy to see everyone. He smiled and looked satisfied. He spent about two hours with us – as long as he could. It was clear that this was goodbye.

Then it was the funeral in Moscow.

It was a very emotional and dramatic experience overall. I am sure many people watched the ceremony online. I tried to prepare myself mentally but I crashed at the very end. I lost it when thousands of people started clapping and screaming bravo.

The ceremony was held at Tchaikovsky Hall and a number of political figures and famous artists were making speeches while a huge line of Dima’s fans was entering the hall and stopping by the stage to say a final goodbye – tens of thousands of people in an endless line-up, with tons of flowers in the best of Russian traditions.

It was very quiet in the hall except for Dima’s voice in the background and occasional songs by the choir. So at the very end when they announced the service was over, everyone got up and started to clap. That lasted for over 30 minutes. While that was happening, the coffin was taken outside, where 10,000 people had gathered and created a corridor, throwing flowers on the pavement where men were carrying the coffin to the hearse.

That was truly heartbreaking and simply showed how much Dima was loved by his people. At the cemetery the next day, an old woman approached me. She was dressed very simply and cried all the time – she was such a big fan. She gave me 2,000 rubles (which I think might have been her full pension), asking me to wire this money to the National Hospital of Neurology and Neurosurgery in London, where Dima had been taking treatment. She said she didn’t have a computer and didn’t know how to do this but she wanted to do it in Dima’s name. That’s the impact he made on people’s lives.

I can’t even begin to tell you how gratifying it is for me that I had a chance to work with him and be instrumental in presenting him in Canada.

I think he will remain with us for a long time before it will start to sink in that he is gone.

Despite how difficult it is for all of us – his friends and colleagues – to absorb this loss, it is totally unbearable for his family – kids, wife and of course his parents. It is simply unimaginable.