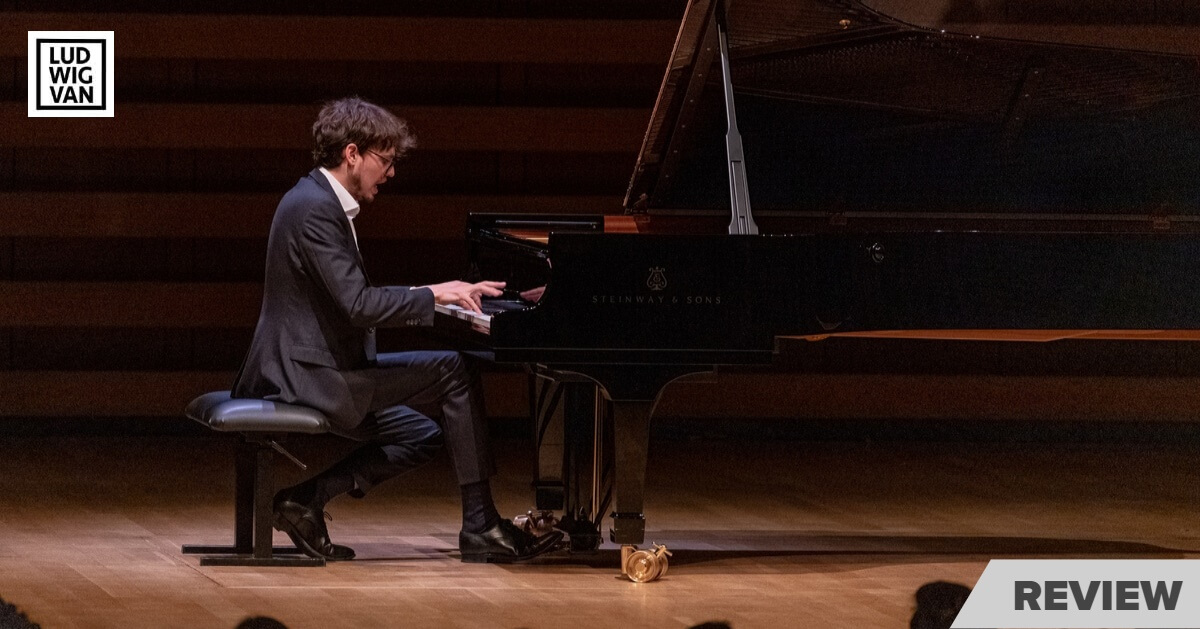 Every once in a while a young pianist emerges who can challenge established ideas of performance and interpretation. It is usually a generational occurrence, one that everyone talks about, and over the past four years or so since his heartstoppingly unconventional performances at the 2015 International Tchaikovsky Competition, people have been talking about Lucas Debargue, rapturously and unceasingly.

Other pianists have been extolled for their extraordinary neurological control (Yuja Wang) or perhaps their exemplary interpretive prowess (Khatia Buniatishvili) or even virtuoso breadth combined with rich harmonic tone (Denis Matsuev, Daniil Triifonov, Dmitry Masleev) to emerge in the last decade). But Lucas Debargue carries all of these virtues plus one crucial quality the others lack: only in his 20s, he has a profoundly original gift for reading and understanding a score anew and making it wholly musical with entirely novel coherence.

Such was the case last night at Koerner Hall where a sold-out audience was given the privilege of attending Debargue’s Toronto recital debut. He saved the best for the last, the famed and difficult Liszt Fantasia quasi Sonata, simply known as the Dante Sonata, which borrows its title from the Victor Hugo essay “Après une lecture de Dante” or “After a reading of Dante.”

Debargue spared nothing in his adventurous but thoughtful review of the work, typical for all his approaches to repertoire, wherein he understands the performance goal of everything in terms of what performative risk he decides he must take, and how far he is going to take that risk. In the Dante Sonata, risk was everything, whether in technique, interpretation, phrasing, balance, and seemingly most of all, text painting. Rarely have I heard all of the Divine Comedy summarized so poetically under two hands.

The two apposed themes, one angular in D minor depicting writhing souls in Inferno (think of Liszt’s Totentanz in the same key), and the other a beatific glow of heaven in F sharp major (like his prolonged contemplation on grace in Benediction of God in Solitude), usually make their way together as repeated thematic transformations of each other. For Liszt, it wasn’t theologically possible to consider Inferno without considering Paradise, and he deftly transformed one theme into the other and back again throughout the 25-minute work. Most times we cannot hear this clearly in the hands of a majority of performers.

Debargue is the exception because he gives his themes all the space they need and with a shocking technique in his tapered and pliable hands, something that seems to dumbfound his observers. However, to Canadians, his hands are not so uncommon: they remind me and many others here of another set of hands with long tapered fingers displaying equally unconventional finger technique I once saw long ago on a certain famed Canadian pianist we all know quite well, one who has been sadly gone for nearly the past forty years.

Those hands served Glenn Gould’s interpretive prowess abundantly well and for Debargue, who sports the meanest left-handed acrobatic surety I have seen in a long while, he is entirely comfortable with his technique and so am I. Accurate, balanced in tone, and completely unintimidated by the worst passage work Liszt could have mustered (or revised) in all of the Dante Sonata, Debargue doesn’t miss a moment low in the keyboard and overcomes any issues the score may present by providing consistent sonic clarity and harmonic import to every theme with enviable facility. While it is true that a few notes were infrequently errantly struck in the right hand, my guess is that he doesn’t worry about this, and frankly neither do I.

The more important attribute of his playing was that he created a new interpretation of the Dante Sonata that fully restored the work to its Fantasia status, a performance new and exciting for us to think about, one that was at one moment elastic and turbulent, and in the next offset by glowing stasis, all of which when rolled together created a new epic for our age.

The rest of the recital was equally imaginative even if it wasn’t always quite as enthralling. Stimulating was more like it, such as the Nikolai Medtner Sonata No. 5 in G minor which led off the second half, an exemplary performance which rivalled if not exceeded Gilels’ recording of the work in many places.

Particularly adroit was Debargue’s handling of some of the more poetic slow passages and the many active sections of continuous harmonic rhythm. Again, it felt new in his hands, almost as if we had discovered that Rachmaninov had in fact, performed this work and a recording had only now been unearthed at last. But Debargue proves he is his own man here as well, giving reasoned scope to his original interpretation for this late Romantic sonata, something of a hidden gem which Debargue has taken the trouble to polish up for us to newly burnished gleam.

The first half consisted of music we have come to associate with Debargue over the past several years, namely Ravel’s Gaspard de la Nuit, which he performed to stunning acclaim at the Tchaikovsky Competition and six Scarlatti sonatas, which he has just recorded. The underlying Spanish conceits and fantasies unified the concert’s first half performances admirably well.

When performing Scarlatti sonatas, most of the 550 written for solo keyboard (five others are chamber pieces) capitalize on the unusual sonic qualities of the many harpsichords the composer played and their meticulous construction which he frequently oversaw. Forgotten in our time is that Scarlatti was a virtuoso of equal quality to Handel and Bach and at the harpsichord, Scarlatti bested Handel in a Baroque cutting contest for the ages.

Also overlooked is that when Scarlatti’s sonatas are performed today, they must be considered as transcriptions for the piano and good pianists must seek ways to compensate for the loss of the instrument’s many idiosyncratic timbres, achieved through plucking and not the felted hammering found in the modern piano.

Debargue is the only pianist I have heard who cares about this at every step of his interpretations, and he showed an admirable ability to transcribe these works well for. Odeon performance, giving up little of the harpsichord while not giving in to the piano. He used the soft pedal when needed, varied tone with ease, rarely blitzed with senseless virtuosity, but provided top speed when needed (such as in the B minor K. 27), and boldly inserted some of the best changing tempi interpretations one could hope for in the more narratively complex pieces such as the K. 206 in E major and the broodingly bizarre K.115 in C minor, pieces I have admired and adored for a very long time. Hearing Debargue perform these early Classical treats in such fresh interpretations was a dream come true.

And as to Gaspard, one can say a lot, almost anything really, about how he understands and approaches the work. Cast in three panels like silk screens emulating late medieval European characters, it was Scarbo, the final movement, which impressed the most this time. The other sections were excellent of course, but as Gaspard‘s devilish inspiration worked its final tortuous path through the hall, I couldn’t help wonder which of the many personalities this work could evince at the drop of a hat was being channelled by Debargue Thursday night.

Certainly, the concert’s exotic and diabolical programme was risked to optimal performance effect, but what stood out most by the end of Scarbo at the conclusion of the recital’s first half was that Debargue simply was going with the interpretive flow of the moment, something like what a master improviser would do, less controlling the music and more allowing the spontaneity of the music to control him. It was a defining illumination of why Lucas Debargue is already the consummate musician and sensitive polymath artist he is today.

His encores, the Scarlatti Sonata in D minor K. 32 and his own composition, titled simply “Toccata” (Toccata à la Fantasia might be more suitable) only demonstrated all the more his symbiotic relationship with the piano. Debargue seems to be in an equal-parts relationship with the instrument, relishing every moment with every piece of music he touches, so much so we cannot tell where the music begins and where Debargue’s intriguing artistic personality ends.

[Update: (Feb. 3, 2020) A previous stated this performance was Debargue’s recital debut, which is incorrect. His debut was in Montreal, 2017.]