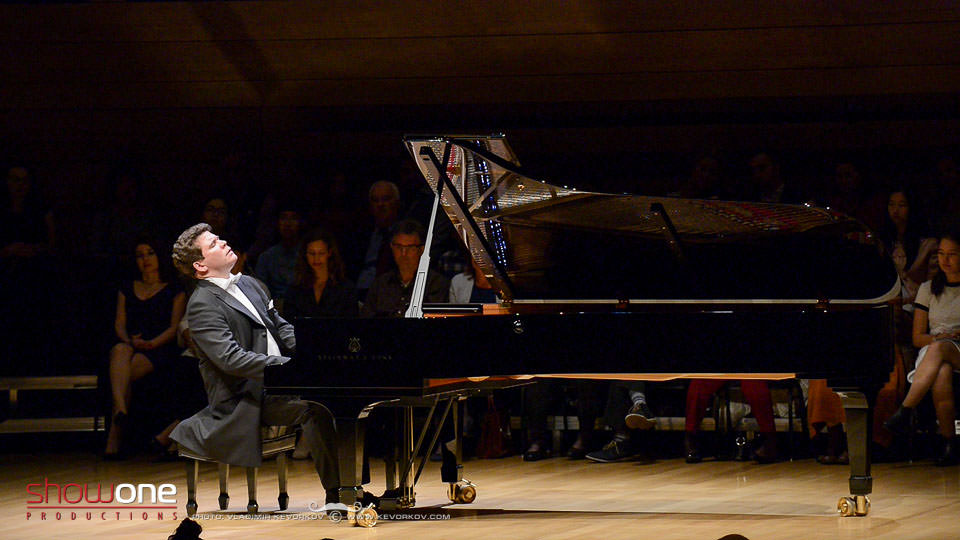 Renowned Russian pianist Denis Matsuev was back in Toronto Thursday night, but instead of coming to conquer the audience, as he so frequently has here, he came to climb some of the highest peaks of the solo piano repertoire. Audiences remain perpetually grateful to Show One and Svetlana Dvoretsky for ensuring one of Toronto’s favourite pianists would return yet again for another stunning recital.

The first-prize winner of the 1998 International Tchaikovsky Piano Competition was not content to merely play the titanic Liszt Sonata in B minor for his first-round entrée: he had to take on Tchaikovsky’s Grand Sonata as well in the second half. Sandwiched in there was Liszt’s Mephisto Waltz, which ended the first half and Tchaikovsky’s Dumka “Scenes from a Russian Village” opus 59 to open the second half.

The Liszt Sonata in B minor is the piano’s grandest, most fearsome and possibly the most complete essay in the genre. After Beethoven finished writing his Hammerklavier Sonata in 1818, the magnum opus for the piano set a near-impossible task for composers to match it in virtuoso intensity and architecturalized tonal breadth. Liszt stepped into the breach with a first version of his only named “Sonata” in 1849 and promptly revised it for publication in 1854.

At the time of its première it was scarcely well-received. The 30-minute work was composed deliberately with no breaks between the four movements, and its staggering virtuosity, consisting throughout of a recurring theme which is very often thematically transformed into unrecognizable figurative patterns, was collectively branded either as “noise” by Clara Schumann or simply derided by many others.

Thankfully, the Liszt Sonata overcame its earliest detractors and now it is played frequently on solo recital programs the world over. Nowadays, it is seen as less the grand finale work-out of previous decades, and more a contemporary showcase piece combining exaggerated virtuoso fire calculated against lengthy passages of measured contrasting moods. A work of considerable intellectual construction, the Liszt Sonata has become a favourite for contemporary pianists to slot into the first half of recital programs.

Matsuev, for his part, elected to open the concert with the famed sonata, something he has frequently done and it was a pleasure at last to come to Koerner Hall and discover that it was our turn to hear how this daring program might turn out.

In some ways, the risk was worth many rewards and the performance paid interpretive dividends. In contrast to a generally predisposed audience of intently focused Matsuev fans (and I was one of them), the piano was initially less inclined to be so disposed to its virtuoso performer. In short, the Steinway’s upper range was too bright, its lowest range indistinct and muddy; it seemed Matsuev was forced to test the piano’s full range of sonority throughout the first two movements of the sonata. The piano could hardly have been called pliable, and wasn’t the best candidate for Liszt’s greatest testimony to the instrument.

However, midway through the first half, Matsuev had capably brought the instrument fully under his power, and then some of his best interpretive moments began to shine. The slow lyrical sections were taken for all they were worth, if even for a few moments of distraction from the sonata’s essential structure. In the end it didn’t matter: the fugue was daring and brilliant, the Prestissimo bravura section stunning, ably bolstering the finale’s fantasia atmosphere. But most of all, Matsuev imparted a sense of thematic life to all of Liszt’s modal transformations of the basic idea, a simple descending scale, which in the pianist’s hands, enriched the work with every deserved nuance. Matsuev knew when to take his time and when to dazzle with speed.

People frequently comment on the effortlessness of Matsuev’s traditional grand Russian pianism, abundantly in evidence throughout his four recitals and two orchestral appearances in Toronto these past ten years. But, one of the singular features that makes the 44-year-old pianist one of the greatest of our generation is not so much his energetic stamina as his performative and interpretive risk-taking.

As a perfect example, after the sonata Matsuev played the devilishly difficult Mephisto Waltz. It felt more like an encore to the first half, rather than a judiciously programmed work. After the egregious difficulty of the Sonata in B minor, the Mephisto Waltz didn’t faze him — he didn’t so much as drop a note of it, and rendered the highly-stylized bravura piece flawlessly, yet equally with an élan that is often missing in many contemporary performances of the work.

Matsuev knows how to enjoy himself, and he convinces his audiences to go along with him, effectively transporting them/us back to a time when the name Mephisto meant something wild, fantastical, literary, fiendishly attractive in its boldly virtuosic character sketching, but above all, straight to a summit of Romantic imagination. Matsuev does more than interpret — he re-incarnates an entire nineteenth-century cultural galaxy.

The second half’s repertoire continued splendidly along those lines. Entirely dedicated to Tchaikovsky, this is something of a dream-come-true for the Russian-majority audience because we scarcely get to hear Tchaikovsky’s piano music performed in North America unless a Russian pianist comes here and purposefully programs these unheralded gems.

After a blissful Dumka in C Minor, another dreamy Arcadian moment in the recital, Matsuev set to proving the Grand Sonata in G major, opus 37, a worthy if not obvious companion piece to the Liszt Sonata in B minor.

Tchaikovsky’s middle-period, four-movement masterpiece unfolds eminently well as the program’s other monothematic work, one cast with considerable compositional mettle, but it takes Matsuev to bring this out succinctly. From the broadest lyrical strokes, the work boasted tremendous variety of mood and colour. Matsuev was unstinting when bringing forth the work’s naturally lush lyricism, entirely unsparing with calming, arpeggiated arabesques.

Just as quickly, the work could be given to exaggerated virtuosity. The last two movements are a bear to play and the moto perpetuo finale, with its intense harmonic rhythm, was a rare performance spectacle. If you missed it, I’m very sorry —as he so often does, Matsuev taught us much about what a piano can do, always working within its fullest range of sound, and he did so with natural joy.

The encores were nearly as revealing. For those keeping track, there were four: Anatoly Lyadov’s The Music Box, Rachmaninoff’s Prelude in G Sharp minor opus 32 no. 12, Sibelius’ “Étude” from his Pieces Opus 76 and “In the Hall of the Mountain King” from Grieg’s Peer Gynt Suite in the famed Russian transcription by Gregory Ginsburg.

From the meditatively serene to the impossibly bombastic, the four pieces covered it all and showed the incredible breadth Matsuev easily brought to his recital. As he climbs every mountain of repertoire, it is small wonder at this point in his career that he needs to play tour-de-force sonatas of both Liszt and Tchaikovsky on the same program to keep it all fresh and interesting, not only for us, but for him as well.

Who knows what Matsuev will try next.